When I first went walking the trails in early September of 2007 I came across one specimen that startled me. I ran up to it off trail and couldn’t believe my eyes. It was the largest mushroom I had ever seen. It was a rusty, copper red color hidden under some grass. As I gently pulled the grass away to reveal this beauty I started shooting from above, but eventually I got down in a prone position, lying on the grass, to get the best angle.

I was to discover later while doing some mycological research that what I was looking at was a bolete, a large variety that was highly prized as edible. Also, after reviewing all the images from those couple of weekend days I discovered that the closer I was to the earth, and from a downhill lie, my favorite shots had a view of the sky in the background. As you will see in this gallery several of the images are composed from below with the sky in the background. 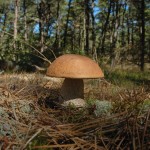