There and Back Again

Planning for this trip started years ago (probably 2001 when I started dreaming). It took me a while to figure everything out and even then it was still just a little out of my comfort zone. The bike was all set and ready to go in March after it was tuned up and the 50,000 mile maintenance done (Thanks Bill). New shocks, all fluids, filters etc. I need a new rear tire but that would be done in CO. I had the latest dry spec bag to keep Big Agnes dry. Never opened it until I got to Billings. I’ll need a couple of other things for my next big trip but I think I did pretty good for a “virgin”.

Four of us set out on Tuesday July 14th for our four to five day ride out west. We were going to take the scenic route through northern PA (RT6 and RT30) and stay on secondary roads as long as time held out. After two days on the rode (as planned) two of the guys peeled off to go their own way (camping all the way to Billings, MT), while Bill and I headed due west to Ft. Collins CO mostly on RT80. Man there is a lot of corn in Iowa and Nebraska.

When we arrived a day early on Friday July 17th my riding partner Bill headed south via Colorado’s Million Dollar Highway and then he was headed home (as planned) by himself. I stayed with friends for four days visiting them and encouraging their teenage daughter who is battling cancer. My prayers are still going out to God for them all. She is one tough cookie. Love you SGL. Love you all. Special greetings to Audrey my wonderful goddaughter. We also visited Cheyenne Frontier Days on Tuesday Night for the Finals of the World Champion Bull Riding. Unbelievable! (Thanks Steve) Oh, and the new rear tire was successfully installed at Northern Colorado Euro Sports.

(Love is a great concept but is rarely accompanied by real action that demonstrates it in truth. Even then our “actions” have ulterior motives based on some level of self-interest. At least that’s how I am. Pure love is selfless and expects nothing in return. See 1 CORINTHIANS 13.)

On Wednesday July 22nd I headed north through Wyoming (where did the name Wyoming come from anyway?) to Billings, MT. Day one took me to Cody, WY where I stayed overnight with a friend (Thanks JD) who had just moved to Cody. That 570 mile ride took me through the Teton and Yellowstone National Parks and out the Eastern Entrance to Yellowstone. The ride from the gate to Cody along the North Fork Highway that runs parallel to the Shoshone River was thew best part of the day. On Thursday I headed out on the last leg of my outbound journey, Cody to Billings, MT and the MOA National Rally only a couple of hours away.

While in Billings I camped for the first time in about 40 years. Me and Big Agnes all the way. A friend from RI (one of the four guys I started out with) Tom and I did the Bear Tooth Highway and the Chief Joseph Scenic Highway on Friday starting with a hearty breakfast in Redlodge, MT. Saturday was “visit the rally vendors” day. We had a great meal at the Rex Bar and Grille. One of the guys was celebrating his birthday so he got a nice piece of cake and a kiss from the waitress.

Sunday was our day of departure so Saturday afternoon and evening we got as ready as we could. The plan was for Tom and me to head back together and stay in Motel 6’s all the way home (which we did) so we packed up all our camping gear and shipped that home UPS to significantly lighten the load. The plan included heading back through South Dakota and the sites and attractions there including the Crazy Horse Monument, Custer National Park and Forest, and the Mount Rushmore National Monument all via some of the best riding in the USA. It was an awesome experience to ride in this area with its scenic beauty and some well maintained very twisty roads…with bison herds here and there thrown in for fun. We left for home Sunday morning at 7:30AM mountain time.

Day one took us to Hot Springs, SD via Crazy Horse where a private group is carving (with dynamite) a tribute to Chief Crazy Horse from an existing mountain. They started in 1949 (my birth year) and expect it to take another 100 years to complete. Talk about long term planning. Day two took us in the morning to Mt. Rushmore and then to Council Bluffs, Iowa for food and sleep. After two days of touring we took the slab the rest of the way.

While we were in Billings I got a call from my sister at 5AM Saturday morning (July 25th). She was watching my dog. I had just buried Keeper an older female Cairn I 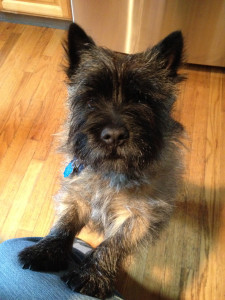 had adopted a couple of years earlier. Denise was anxious because JJ was sick and she wasn’t sure what it was. We agreed that she would take the dog to the vet. A couple of hours later she called crying. “JJ has cancer. I don’t know what to do. The vet says he is very sick. They don’t know if he will make it until you get home.” I started crying inside but tried to hold it in. “Den we have to put him down.” I started crying at that point. My little buddy who had seen me through so much the past five years wasn’t going to be there when I got home. But making him suffer for another week so I could give him a final hug wasn’t the right thing to do…for him. Denise sadly agreed and the vet put JJ down. I am looking forward to seeing him again, Deo volente.